Why breakthrough in Alzheimer’s disease is still far away 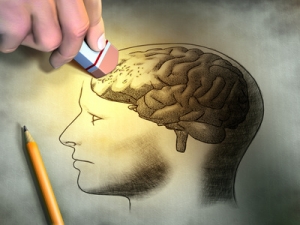 Usually, publications about Alzheimer’s disease (AD) start with horrific statistics about current and future prevalence and incidence rates of the disease. And indeed, the figures are horrifying: facing demographic changes, the UN prognosis of worldwide more than 150 million affected people by the year 2030 is frightening1, especially since effective therapies are still wishful thinking.

Therefore, equally unprepared societies and healthcare systems are struck with awe and even wealthy countries like Germany lack the appropriate infrastructure for taking care of the growing number of patients suffering from dementia.

It was only this year (!) that dementia was defined as a disability in the German social act, which finally will allow for better nursing care for dementia patients2 – a tremendous breakthrough in German social legislature and simultaneously a total disgrace that it took so long.

Failure, holy grail and back again

Before I continue – let us be clear: AD is devastating for the patients and their families. Especially in the early stages, but also episodically later on, the patients are well aware of their increasing disability and how it burdens their loved ones.

Usually this should be the main motivation for fighting the disease; unfortunately, in our times we also need complicated constructs like socio and health economic impact analyses to persuade ourselves and our healthcare systems that indeed, the above cited numbers are distressing.

Every now and then (most recently this summer), lay press organs refurbish industry and academic press releases to announce “new hope” and “therapeutic breakthrough”, even when the reality urges for much more skepticism. But why is that?

Why are there more and more effective cancer therapies, but we still cannot get a grip on dementia? Indeed, research funding for cancer is by far higher than for dementia3 but is this really “only” a funding issue, or is neuroscience research and drug development caught in a loop?

But let’s start from the start. 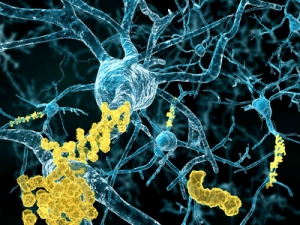 Alzheimer’s Disease is considered a neuronal amyloidopathy, meaning that – for reasons not well understood – amyloid beta (Aβ), a physiological protein involved in many physiological neuronal processes, is wrongly processed, and thus accumulates in the brain.

With time, the accumulated protein aggregates and the typical plaques, insoluble Amyloid aggregates (which by the way were discovered more than 100 years ago by the German physician Alois Alzheimer), are formed.

Almost 90 years after Alois described the symptoms of his first patient Auguste, suffering from what he referred to as “pre-senile dementia”, Braak and colleagues introduced a staging, based on the spatio-temporal distribution of amyloid aggregates in the brain.

Even in those times (i.e. 1990s!), AD was actually a pathologist’s diagnosis – that is, a proof of an AD diagnosis was only possible after a postmortem histological detection of the pathological hallmarks of the disease.

Based on Braak’s staging4, the pathology starts in the perirhinal areas and spreads throughout the limbic brain areas (especially the hippocampus) to later on affect the entire neocortex.

We have a target and we have a spreading pattern – so why don’t we have a therapy for Alzheimer’s disease yet?

Simple! In our mechanistic views of how drug discovery works, we have a target (amyloid) and we have a spreading pattern (Braak’s spatio-temporal map) – so why don’t we have a therapy yet?

This approach seems to work for many other diseases – once you know the pathogenesis and its (spatio-) temporal pattern, you know where to look and how to target and disrupt the pathogenic process. Unfortunately, this approach does not seem to work for the brain and especially not in AD.

“Older” yet still frequently used therapeutic approaches aim at altering synaptic transmission in order to enhance cognitive performance in AD patients – with less than satisfying results.This is not surprising – these approaches are symptomatic, rather than causal.

The novel therapeutic approaches, antibodies against different forms of Amyloid beta, enjoyed the summer media hype, however are far from being a cure. Several companies tried this approach; Eli Lilly’s Solanezumab targeting the soluble forms of Aβ currently seems to provide the most promising results5. Especially when the drug is given in earlier stages of the disease, the cognitive decline seems to be, somewhat, delayed.

The clinical relevance of these findings is however debated, as the numerical significance is smaller than what clinicians usually consider as clinically significant. Biogen’s Aducanumab, an antibody against insoluble Aβ, also led to a delay in cognitive decline, however with a puzzling dose-response relationship6.

In contrast, Roche’s Gantenerumab (also targeting insoluble Aβ) failed to achieve the study goal (possibly due to dosing issues)7 and it is highly questionable, if we will witness another study with this agent.

Be that as it may, (at least) for the first time we are at a stage where disease modifying approaches are used for AD – after more than 60 years of treating patients with drugs offering poor symptomatic control and many undesired side effects – this can indeed be described as a breakthrough.

Focusing on a single target seems to be one major problem in a disease where almost every week new molecules and pathways are suspected to be involved somehow. Let’s keep in mind – there are also many experts who claim that pathologies involving Tau, a cytoskeletal protein, are involved in AD pathogenesis to the same extent than Aβ8.

But even the amyloid pathology is anything but straight forward. Recently, for example, Amyloid eta (Aη) , another proteolytic amyloid fragment, was implicated to be pathogenically relevant9.

These findings could provide explanation why drugs that inhibit the generation of Aβ, and indeed have been shown to reduce Aβ levels in the brain, are not as successful as expected. These drugs, so called beta secretase inhibitors, concomitantly lead to an increase in Aη production. The authors do not claim (yet?) that Aη targeting drugs or antibodies are the novel holy grail of AD research; their findings merely demonstrate the many facets of the complex disease.

But why do we need to be sceptic about such novel developments? Why is it so difficult to adapt therapeutic strategies to novel findings in the context of AD?

The main reason, of course, is the complexity of the central nervous system per se and of the disease in particular. However, major obstacles also include that preclinical models of AD are of highly doubtful validity to say the least.

The laboratory mouse, our most “beloved” preclinical in vivo model, does not suffer from AD – unless transgenic manipulations lead to the expression of human Aβ precursors or flawed amyloid processing enzymes10.

Naturally, reducing the artificially high levels of human Aβ in these animals will lead to significant findings – but such studies (and there are more than numerous) will not provide further knowledge but rather merely affirm what we already knew – that Aβ seems to play some kind of role.

Thus, inadequate preclinical models (be they in vitro or in vivo) are a major reason for AD research going around in inefficacious circles of hen-and-egg discussions.

But still everyone is using these models – we persuade ourselves that there are no better ones. And this is true, at least for the ways we are used to do research where every finding needs to fit a certain dogma in order to get published, receive grant money etc.

Thus, despite an incredible biotechnological revolution in the last decades, preclinical research, especially in the field of neuroscience, is becoming more and more conservative and lethargic; and thus it is not surprising that we are still far away from novel, effective and safe treatments not only against dementia, but also depression and other brain disorders.

Why are we consciously ignoring the few reliable findings from preclinical and translational studies?

Surely, we clinical researchers can do better, right? Wrong!

For instance, we are also using antique and inadequate tests and “wrong” patient populations despite better knowledge. For instance, any physician will confirm that the sensitivity of the Mini Mental State Examination (MMSE) is very low and its specificity is highly problematic. And yet, we use this test in dementia studies!

Quite often, the MMSE is still used as an outcome variable in AD trials – an endpoint which rarely shows clinically relevant changes. And even more often the MMSE is the basis for the initial severity determination prior to inclusion of the patient into the study – an approach which is still acceptable to regulatory authorities11. Indeed, more recent and elaborate tools for assessing cognitive functions in dementia patients are available (e.g. activities of daily living12), however if the trial population is selected based on an MMSE-based cut-off we might actually start trials with an ill-defined population.

Why are we consciously ignoring the few reliable findings from preclinical and translational studies?

It is known that amyloid levels reach pathological levels many years before the first cognitive abnormalities are seen in the patients – ergo it is highly unlikely to see a delay of cognitive deterioration in patients in late stages of the disease.

It is known that the amyloid plaque load in no way correlates with cognitive performance and, as a matter of fact, nor do amyloid levels per se – and yet we now aim to reduce amyloid levels or plaques in our patients, perhaps neglecting other potentially more effective targets.

So what are we to do? 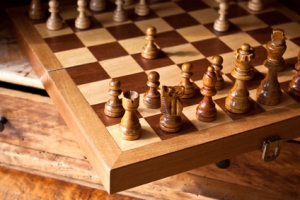 Much stronger research efforts on secondary prevention as well as early detection of AD are required.

We need to be able to identify the patient many years before the cognitive symptoms appear – only then, treatments which aim to delay cognitive decline will also be more efficacious.

We need to implement sensitive cognitive tests and parameters for assessing the long-term efficacy of treatments.

When doing so, we need to consider individual patient characteristics in much greater detail. Similarly, we need cognitive tests that are able to demonstrate efficacy in patients with late stage AD; perhaps in these patients re-learning to get dressed or feed alone is a much more relevant endpoint than spelling the word “world” backwards.

We need to integrate novel therapeutic regimens within treatment strategies rather than hoping that stand-alone treatments will provide a cure. Plenty of studies, preclinical and clinical, show that cognitive engagement and training is a prerequisite for delaying cognitive deficits in patients of all ages13.

Perhaps the AD treatment of the future will consist of such psychological approaches in combination with one, or likely several, drugs or antibodies.

About the Author: Dr. Alexandre Patchev